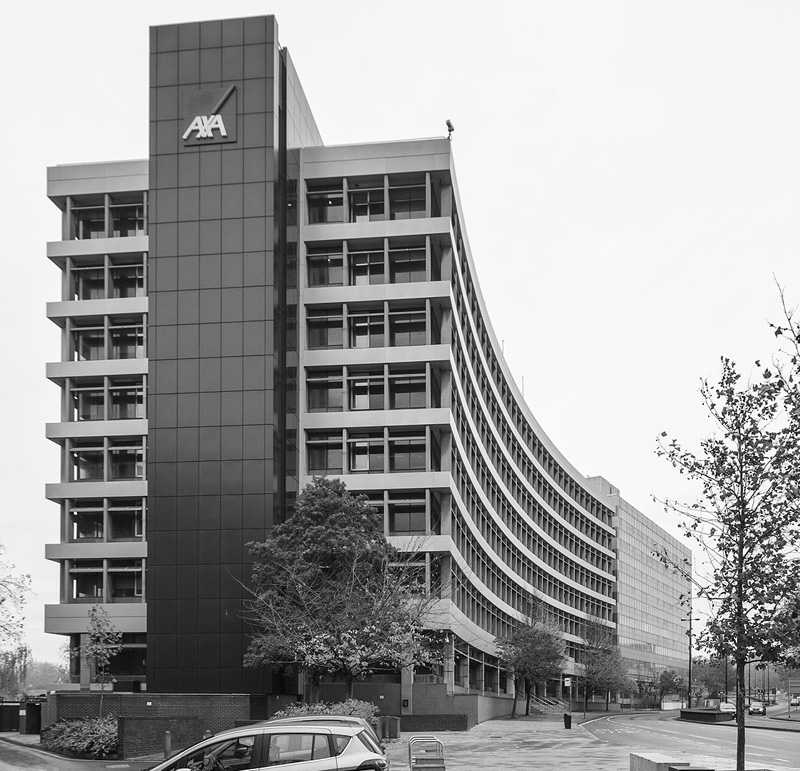 On a recent visit to Ipswich, I went and had a look at the new road layout near to the Grade 1 listed Willis building, and how developments have changed the area since I remember it being built in the early 1970’s

Just up the road is what was the Guardian Royal Exchange head office, and the curved ‘extension’ built to the designs of local firm Johns, Slater Haward in 1969.

One of its distinctive features was the brick tiling on the horizontal sections.

It’s now a uniform grey cladding and (on an admittedly grey day) has lost some of its distinctive look. 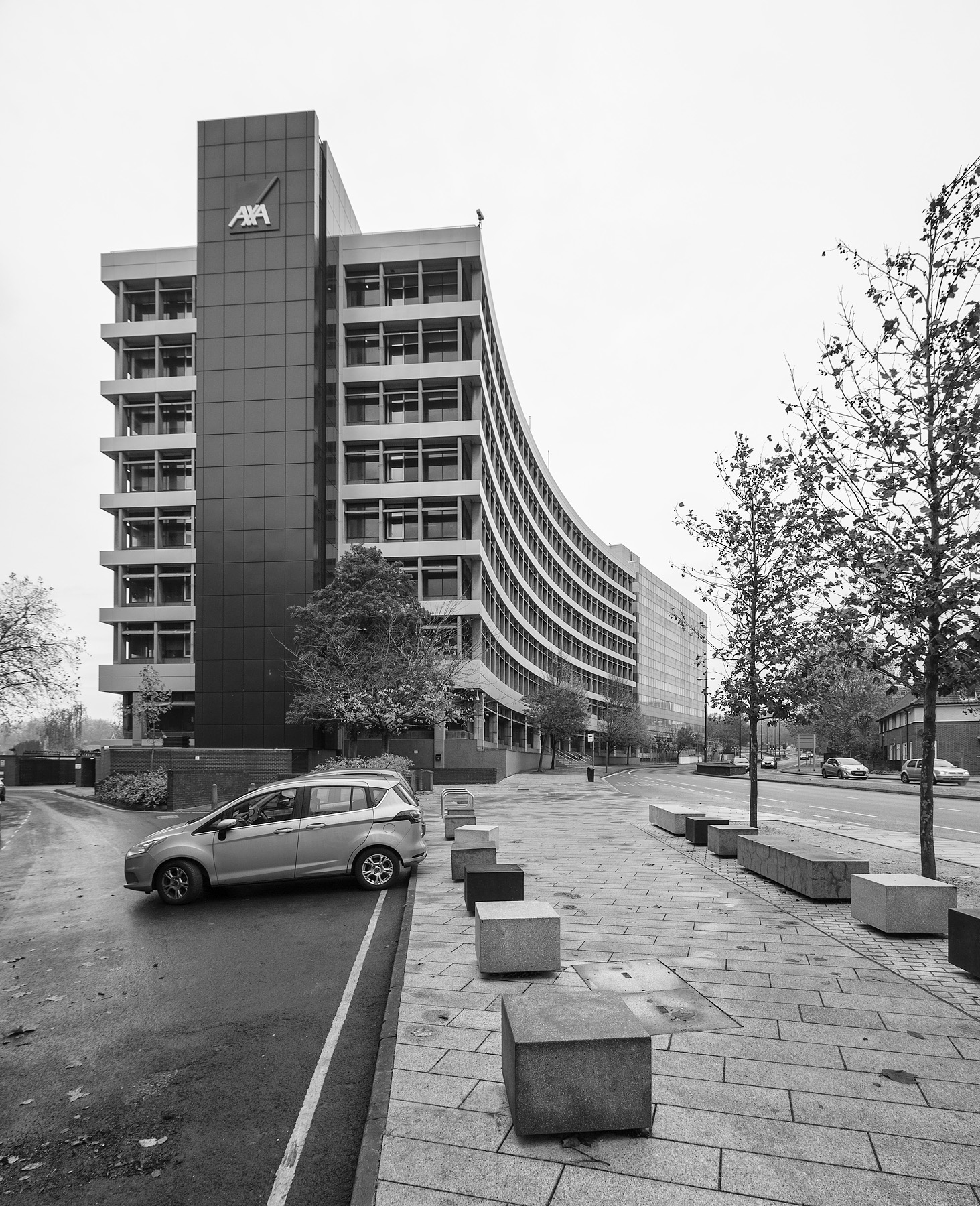 Although I’ve kept the verticals good and straight in this image (by keeping the camera level), I’m using a standard wide angle lens, since I didn’t have my normal architectural photography kit with me.

The view below is actually a composite image of three shots, hand held. Compositing the images and correcting geometry afterwards also gives much higher resolution images (especially if using more than a few individual shots)

It’s allowed me to show the curve of the road and the building along it. 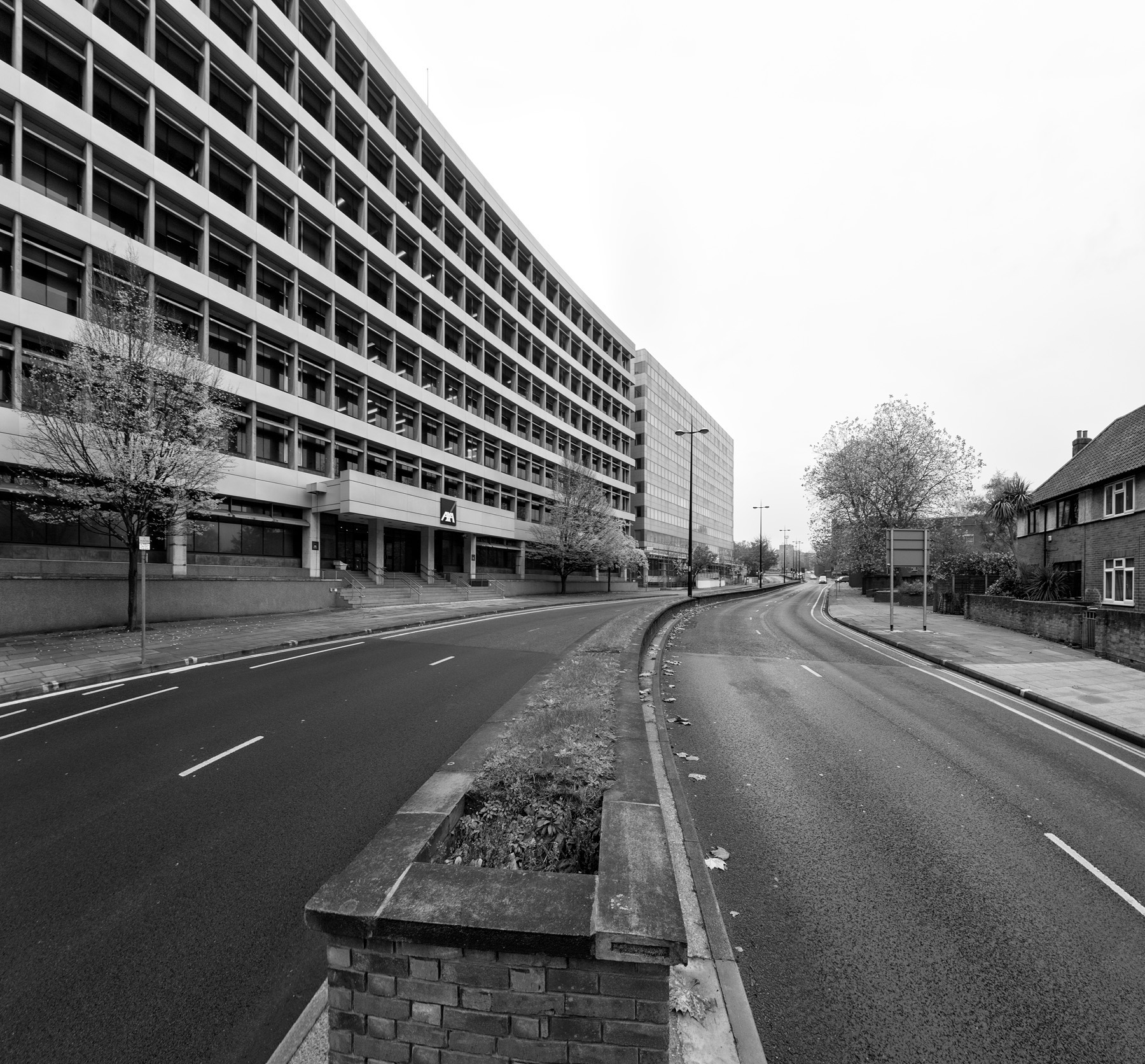 Considerable care is needed when creating ultra-wide views. It’s easy for distortions to occur to straight lines that give the wrong feel for the shape of the structure. Note the warping towards the top left corner in this colour image. 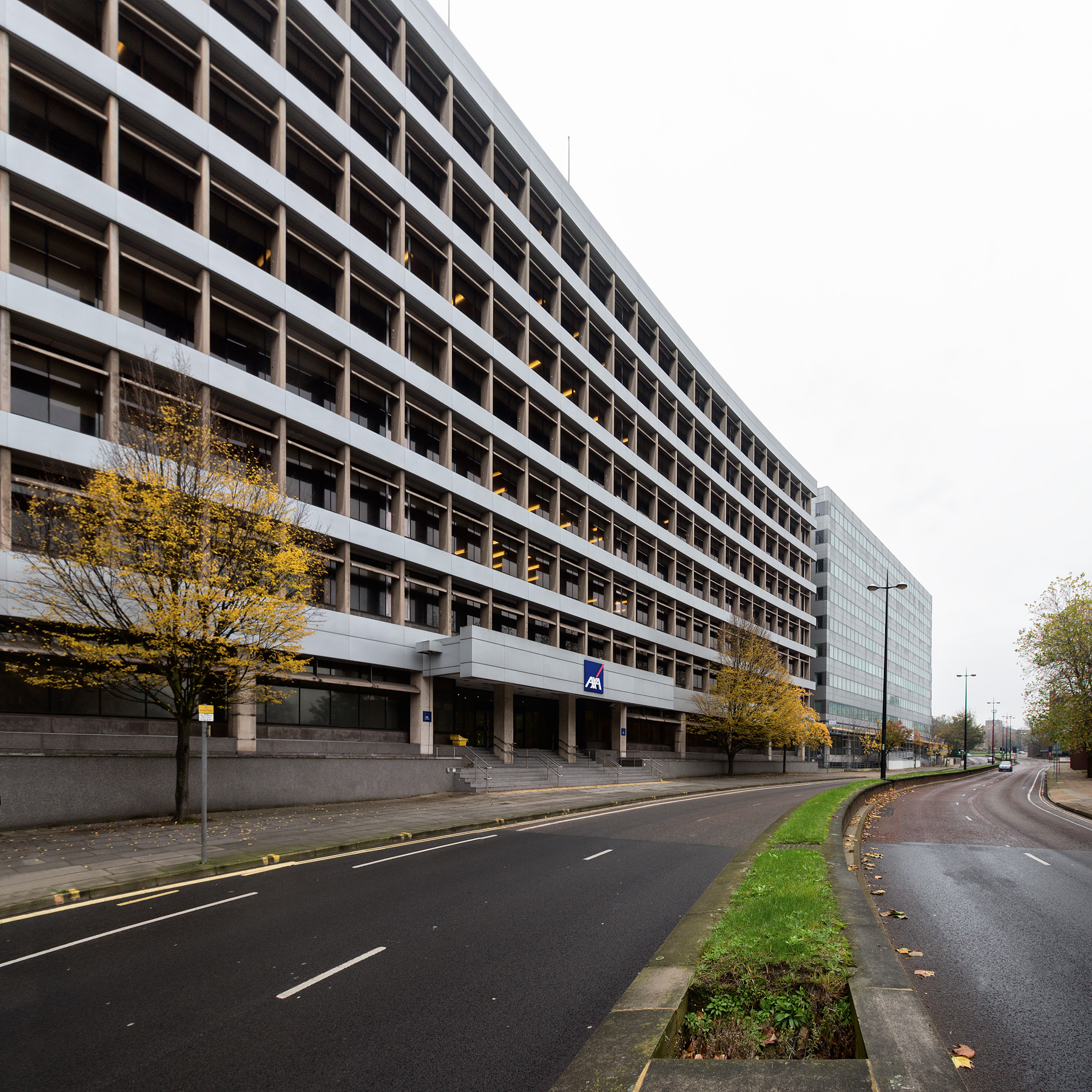 Fortunately much of this can be rectified, but it always helps to get the best source images to start with.

The building has some personal memories too, since I briefly worked there whilst at university, and realised that whatever I did for a career, it wasn’t going to involve insurance…

The grey cladding seems to have been applied everywhere, so I suspect that it was required for more than decorative reasons [CMI Consulting mention ‘modernising its appearance’] 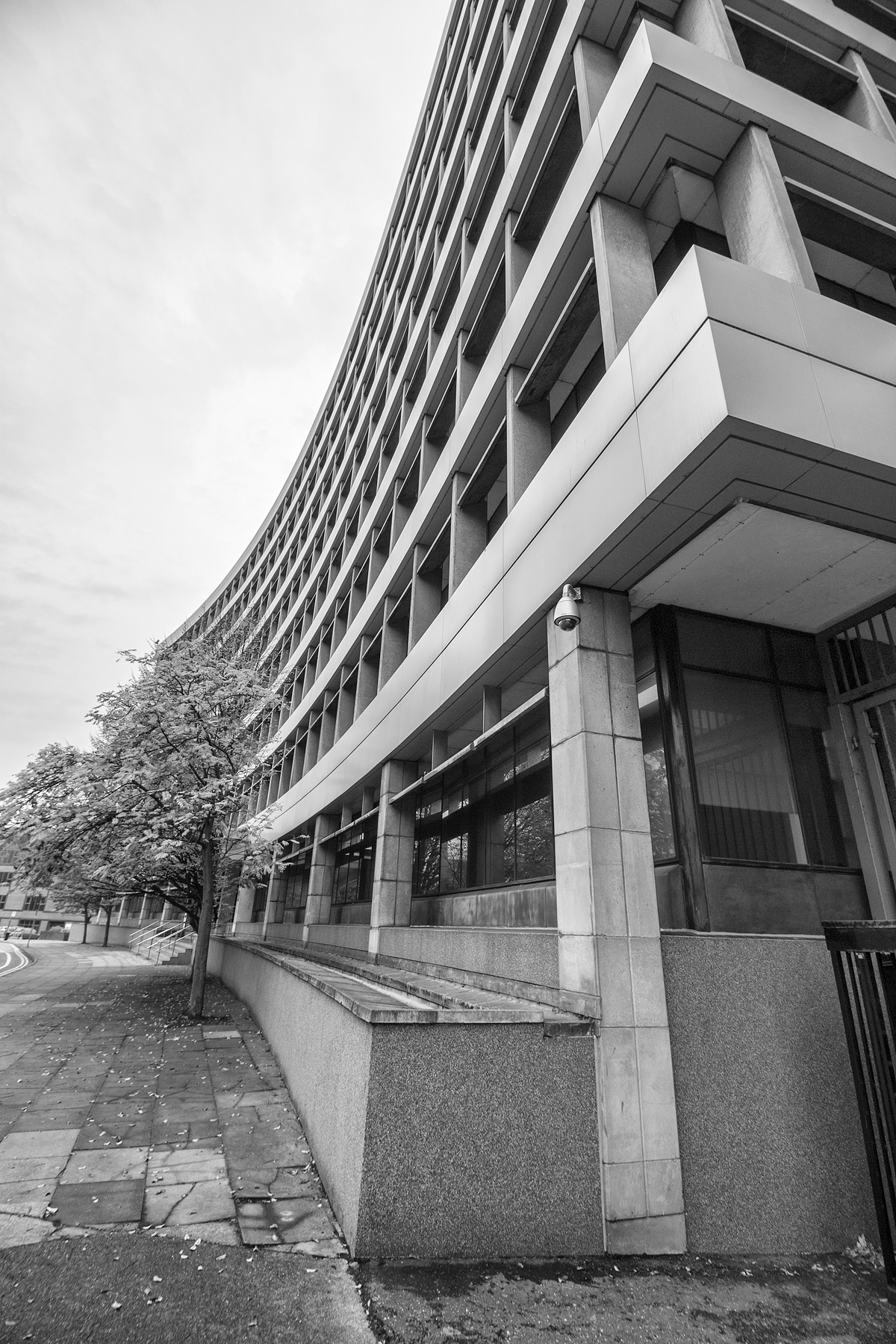 Just a couple of hundred yards from the far end of the building is the much more famous Willis building (Foster, 1970-75 – Grade 1 listed 1991).

I recall it being built, only a few years after the extension to the Guardian Royal Exchange HQ, and near to the already failing mid 1960’s edifice of the ‘Greyfriars development’ (Edward Skipper & Associates 1964-66).

This view shows the new road layout, replacing the 1960’s roundabout with its grey and damp tunnels for pedestrian use. 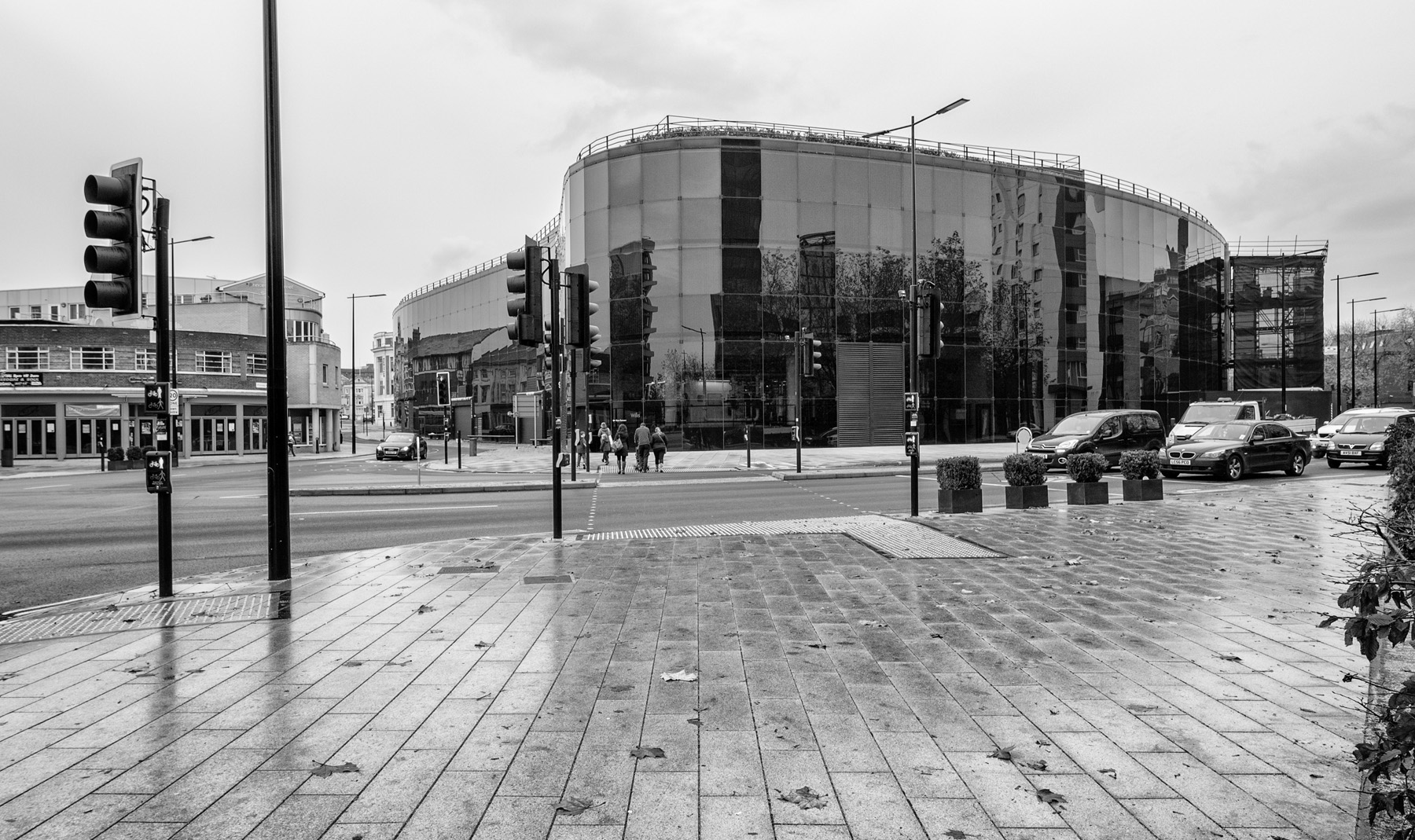