Photographs inside a church spire

Inside a medieval church spire

The first time I went up inside the spire at St Mary de Castro church in Leicester was to take some photos of cracks in the stonework.

Not so tricky you might think, but for the fact that it was a needle spire going up nearly 200 feet. The interior of the spire has scaffolding every 8-10 feet, but it’s a small space for setting up camera kit for detailed work. There is also the fact that it’s pretty dark, so some of the shots here are several seconds exposure.  i.e. everybody stands still for a few seconds. 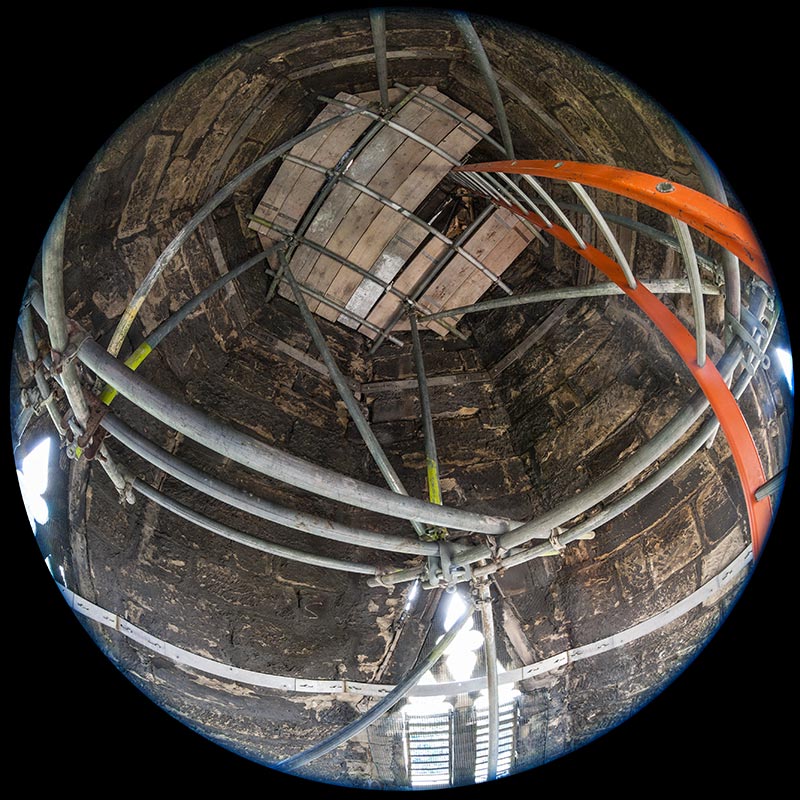 The only lighting comes through the three sets of lucarnes, in the octagonal structure.

The view down the ladders 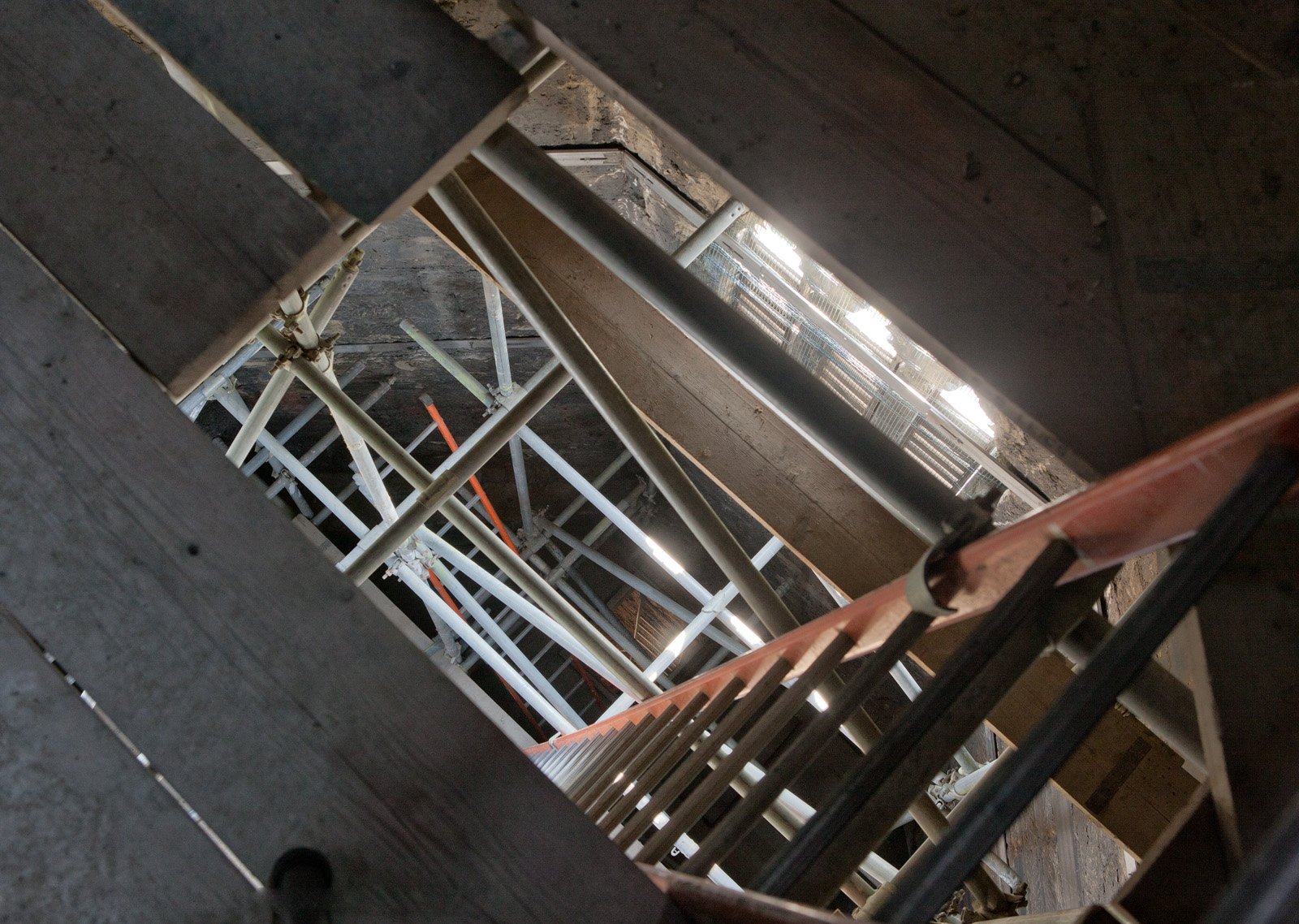 This view of the project architect gives an idea of the cramped space.

Note too, the light coming through from outside, and the somewhat freestyle ways that stones are arranged along the junctions of the walls of the octagonal structure. It is a crocketed  spire, the bases of some being visible, although the lack of any substantial quoins or other structural elements made me even more glad it was a calm day. The spire did subsequently have a dangerous structure order placed on it by the local council.

The full set of images  (supplied as prints) were used in supporting a grant application to English Heritage, for additional work on the spire. 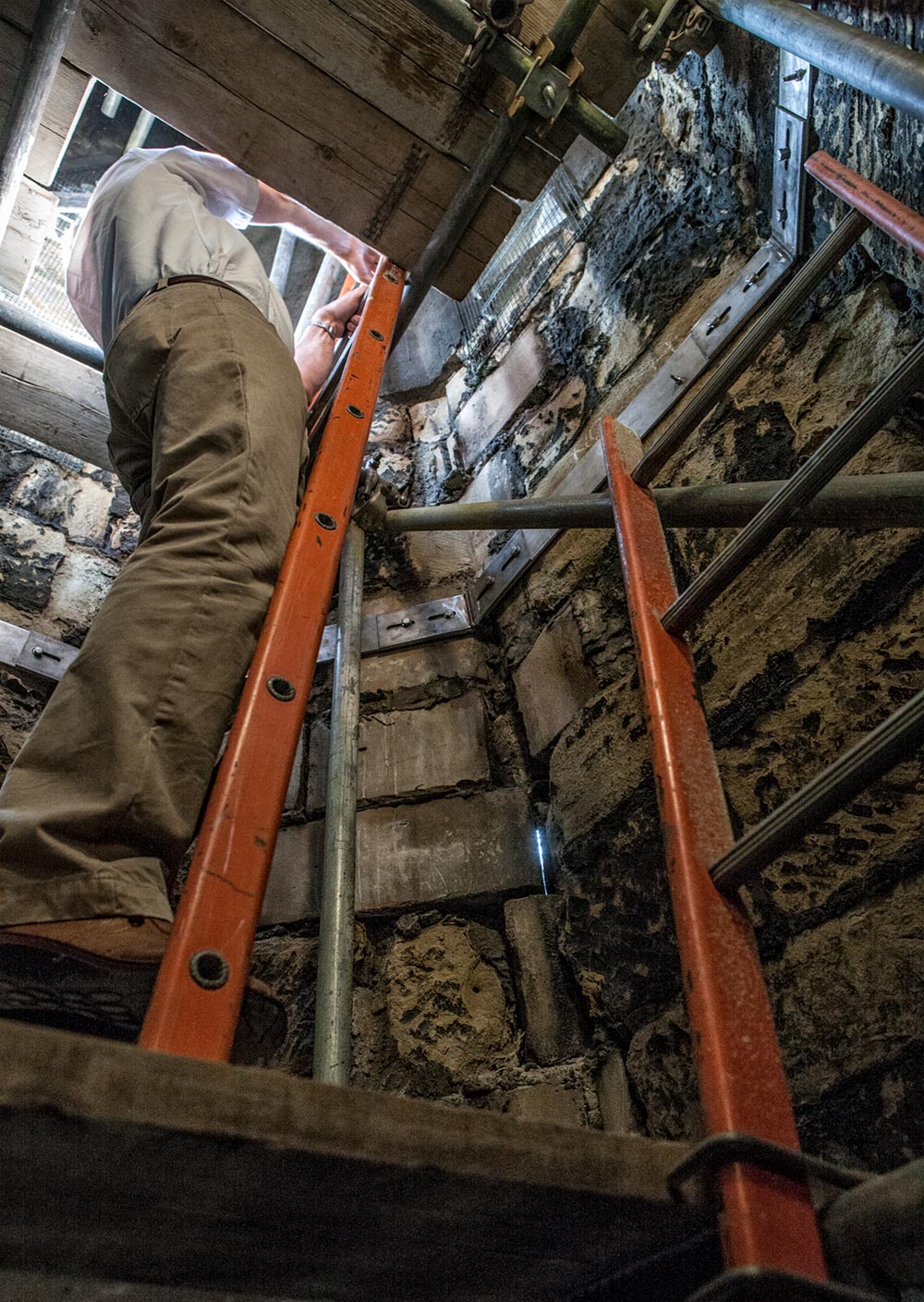 Several shots were taken with a fisheye lens (the Canon EF8-15mm f4L) offering a range of views, right up to a full 180 degree circular view.

A partial crop shows the stainless steel tension bands fitted inside the tower after serious cracking was first noticed.

Below the band, you can see scaffolding support slots from the original 15th century masons, along with clear carving and cutting marks on the surface of the original stonework.

This elegant spire has had several episodes of major repair work, with the most recent (around 1919)  rebuilding the very tip of the spire in limestone – almost certainly a major contributory factor in the problems of the 21st century, leading to the (hopefully temporary) demolition of the spire. 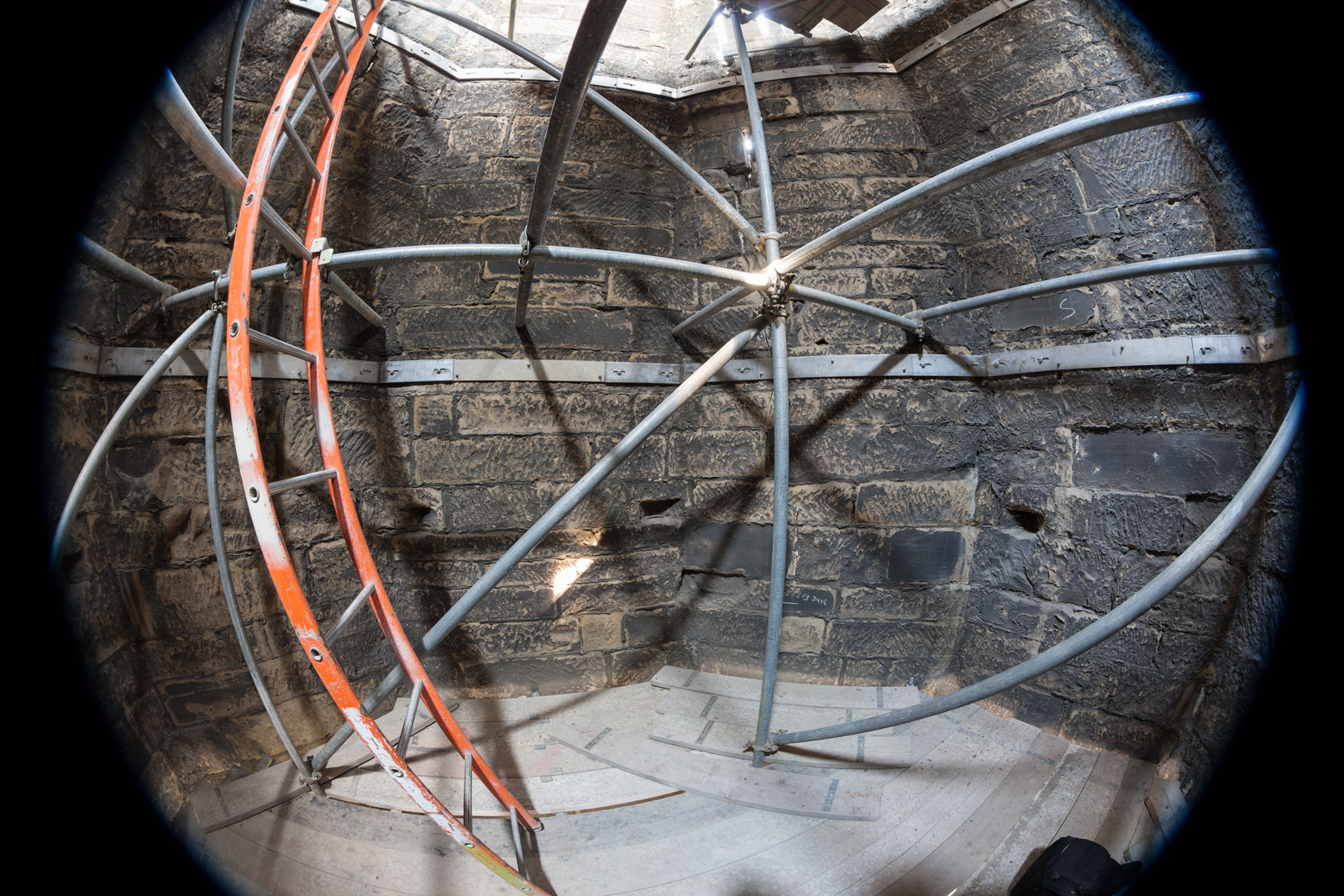 Such curved images, whilst quite accurate, often confuse viewers, missing the point of what you are trying to show.

One way round this is to ‘correct’ the distortion to some extent. The image is no longer an accurate representation (you can use fish-eye lenses for some photometric analysis) but looks more ‘real’. 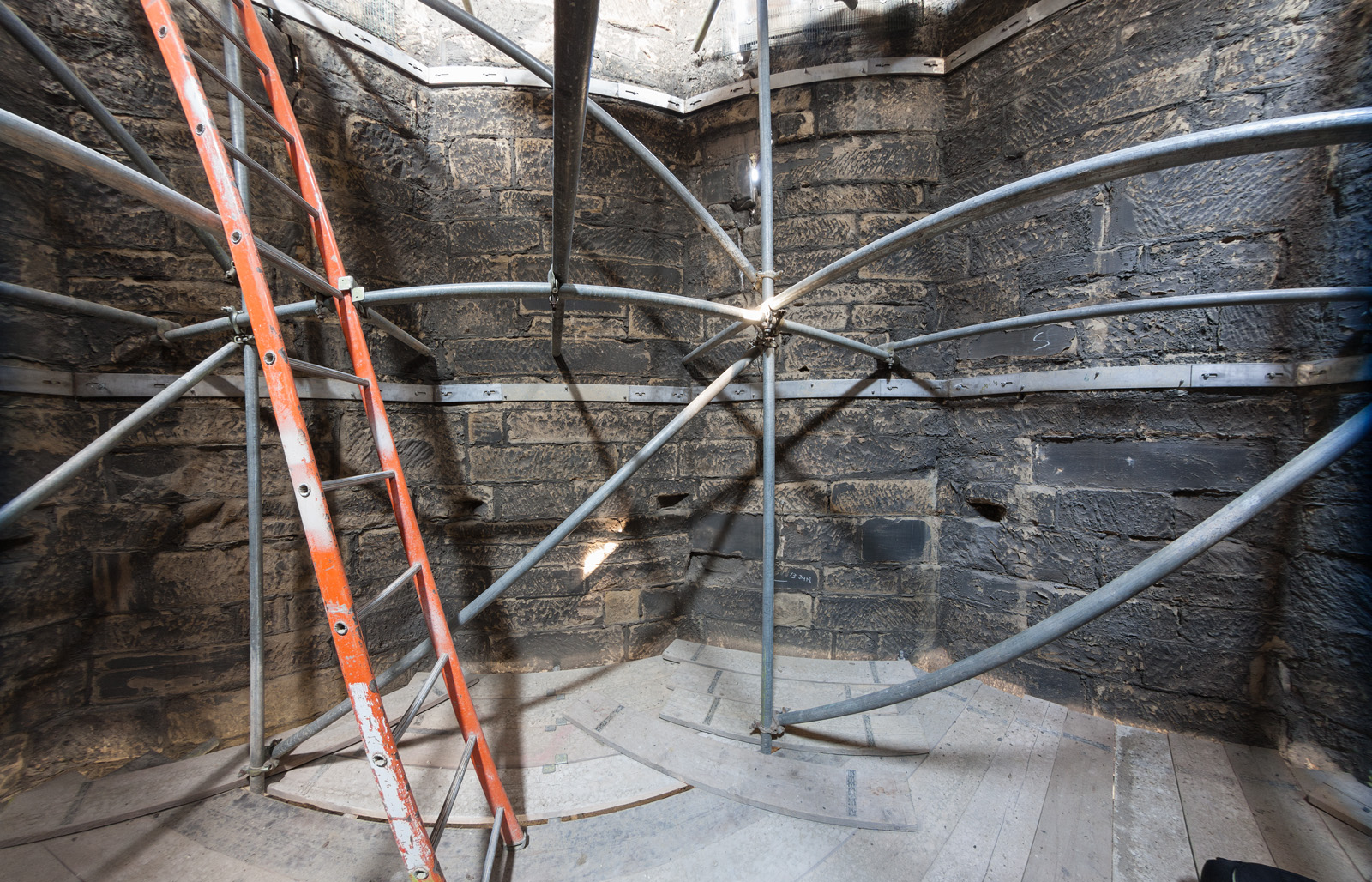 Some of the cracks in the stonework ran for a considerable distance. Where visible outside, these were easy to show, but inside the small space, the only way to get sufficiently high resolution is to stitch multiple images.

This very tall example consists of three images. Some minor stitching errors show up in the scaffolding, but the image is stitched to ensure the accuracy of the stonework.

This photo has no calibration for measurement. Where this is required it’s time to take rather more equipment up with me (and other people to help haul it up ladders).

The crack runs a few centimetres below the chalk mark – made only weeks earlier.

In this detailed section of the main image, you can also see measuring pins to record crack extension. 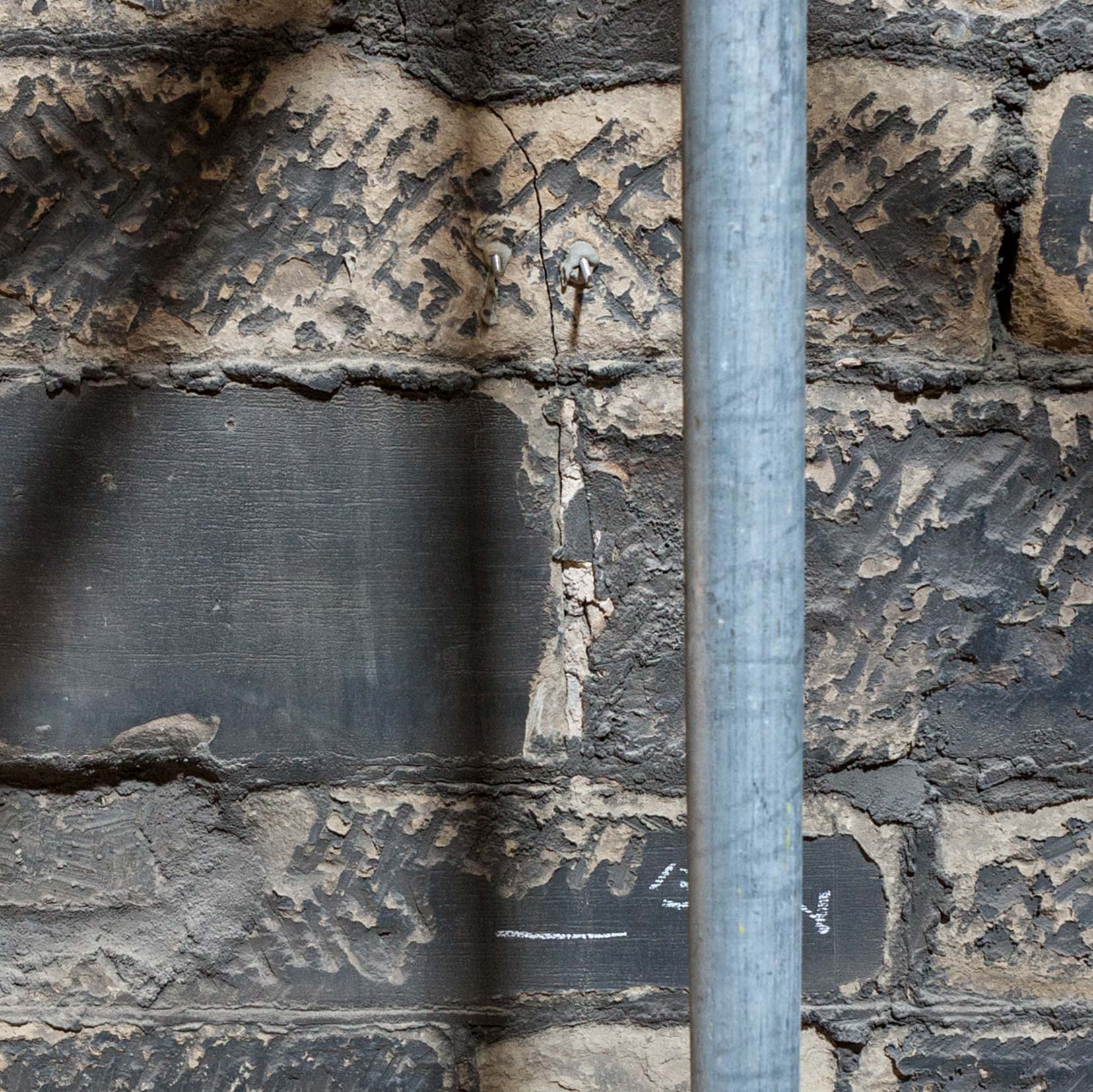 Many sets of such pins were inserted for monitoring crack progression – no electronic monitoring here, just a micrometer. 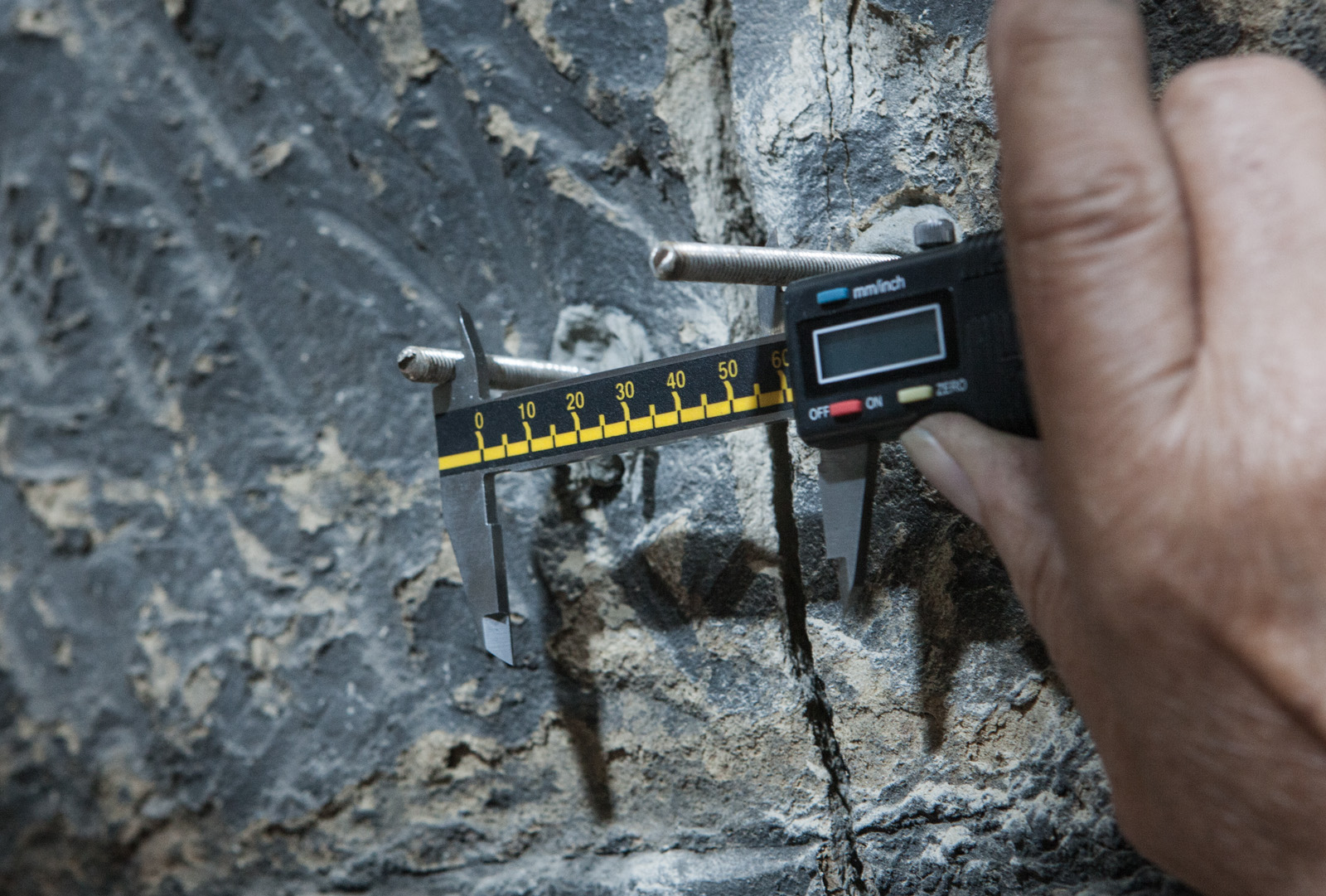 It was not a windy day, but you could hear the stones moving and many cracks were large enough to see through.

The spire has (2014) been demolished. You can see more images on this site in the St Mary de Castro project listing.

If you’re curious, there is a zoomable 360 degree view of Leicester from the tip of the spire on our high resolution imaging page, that I created, just as demolition was about to start. 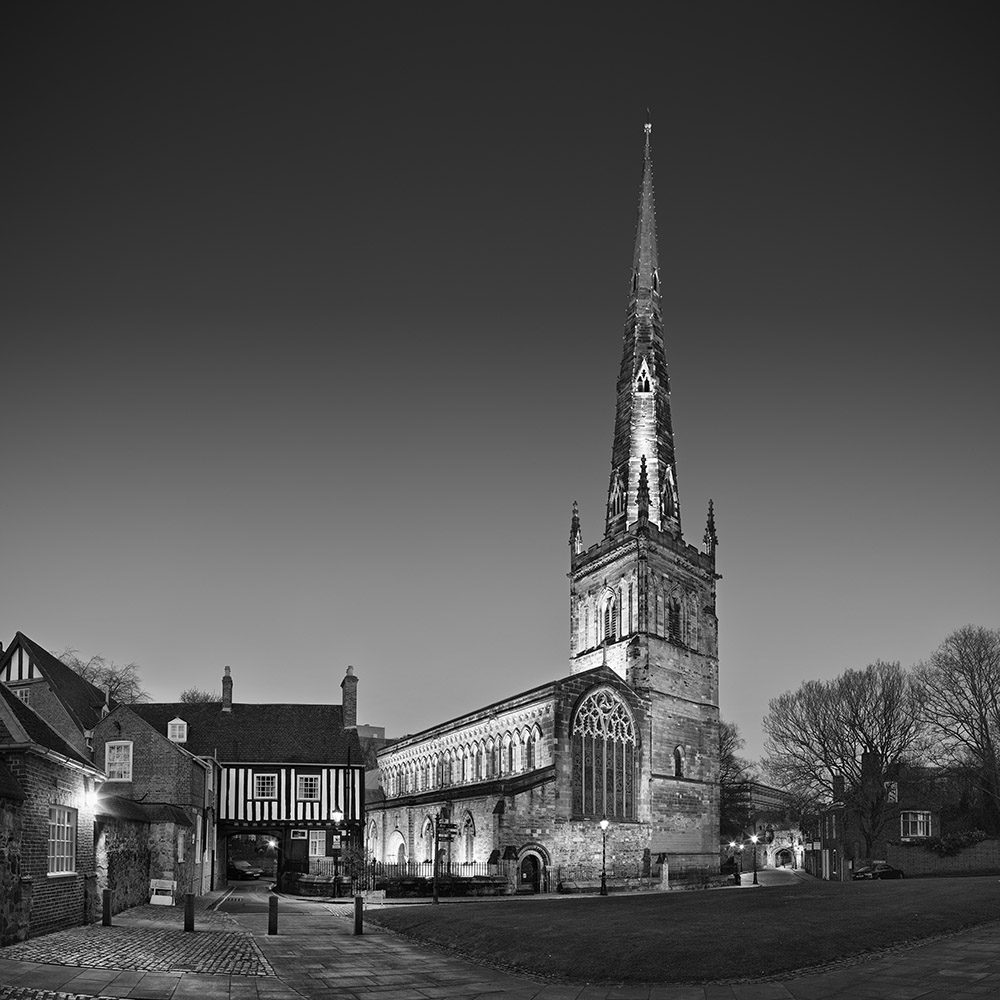